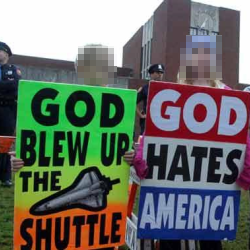 The loosely-knit Anonymous group appears to have launched a distributed denial-of-service attack against websites belonging to a highly controversial American church, after the two launched a war of words across the internet.

Westboro Baptist Church is a small, independent church based outside Topeka, Kansas, which has become notorious around the world for picketing funerals, burning the American flag and its hateful stance against homosexuality.

The group’s head, Fred Phelps, has encouraged members to picket military funerals with offensive signs such as “Thank God for Dead Soldiers”, claiming that the United States is being punished by God for not condemning homosexuality.

And it is a number of websites run by the church, with hateful names such as “GodHatesF**s” and “GodHatesAmerica” that have been disrupted by an internet distributed denial-of-service (DDoS) attack.

A couple of days ago, a message appeared on an Anonymous website accusing Westboro Baptist Church of bigotry, and calling on the congregation (most of whom are members of Phelps’s extended family) to stop its public protests or have its websites attacked.

Westboro Baptist Church’s response was typically robust and uncompromising, calling Anonymous a group of “coward crybaby hackers”, and a “puddle of pimple-faced nerds”: To be honest, my feeling is that Westboro Baptist Church probably revels in feeling persecuted, and probably gets a perverse kick out of receiving the attention of the world’s media and groups such as Anonymous.

If that’s the case, then they’re probably enjoying what’s happening right now – with their websites flooded by traffic, preventing internet users with legitimate interest in the group visiting them.

It always makes me uncomfortable when controversial groups have their freedom of speech curtailed by activists, however unpleasant the things that those groups may be saying. When groups – such as the Westboro Baptist Church – have repellent views, I feel it’s better to allow them to express them than to have them silenced through internet attacks.

What’s interesting is that there may be some affiliated with Anonymous who don’t agree that targeting the Westboro Baptist Church is an appropriate use of their time and resources. But when you have a group like Anonymous, with no leadership and no organisational structure, where anyone can claim to be speaking for the group, it’s impossible to tell what actions hactivists should take and which they shouldn’t.

One thing’s worth remembering though. Participating in a denial-of-service attack is illegal, however much you disagree with the contents of the website that you’re attacking.

Update: Another twist in the tale! As some have pointed out in the comments to this article, some people claiming to represent Anonymous claim that the initial anti-WBC message that appeared was actually posted by the Westboro Baptist Church itself!

A message on the AnonNews site urges Anonymous supporters not to DDoS the Church’s websites. As with all things Anonymous, it’s hard to tell who’s who. The group is headless, and has no structure. Anyone can speak and claim to be representing the group. I have to wonder if such a chaotic structure is really to Anonymous’s benefit in the long run.