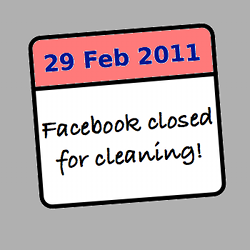 A hot meme flying around Facebook at the moment is – shock! horror! – that the site will be closed for maintenance from 29-31 February. Anyone trying to login on those dates will be disappointed.

WARNING!! Facebook will be closed for maintenance from Feb. 29-31,2011!! Facebook wants YOU to Share this message with your friends for the best chance of alerting everyone. Many people will try to login between February 29 &amp; 31, just to find the site closed down for those days with no warning. HELP YOUR FACEBEOOK FAMILY -- REPOST THIS! lol for all of us addicts

Those people will probably also be disappointed in their calendar, since there is no 29 February in 2011. That date happens only every fourth year, when there is a Leap Year. All Leap Years are exactly divisible by four. So 2011 is not a Leap Year. That’s the law. Clearly, there is also no 30 February and no 31 February – not this year, not next year, not ever.

This sort of joke is reminiscent of the great “First of April internet spring cleaning” meme of the late 1990s. Back then, April Fool’s rumours would circulate that the internet would undergo its annual one-day shut-down on 01 April so that “dead email, inactive ftp and www sites, and empty USENET groups” could be removed to speed up the internet for everyone. The worrying thing here is that at least some of the Facebook users who are passing on this 2011 joke seem to be blissfully ignorant that it is a joke.

They genuinely seem to think they’re helping their friends by sharing the warning.

They’re not just reading this meme and passing it on, but accepting it unconditionally. This means that they’re not paying any attention at all before forwarding it.

That’s dangerous. Our collective willingness to pass on internet cruft without so much as a critical glance is exactly the sort of behaviour which helps out cybercrooks.

This is how dangerous links end up endorsed widely, how risky on-line activities are made to seem harmless, and how innocent internet newcomers are sucked into on-line behaviours which can be exploited to our collective economic cost by cybercriminals.

Make sure that you keep informed about the latest scams spreading fast across Facebook, and other internet attacks. Join the Sophos page on Facebook, where over 60,000 people regularly share information on threats and discuss the latest security news.

16 comments on “Facebook shock – site to close for maintenance at end of February?”