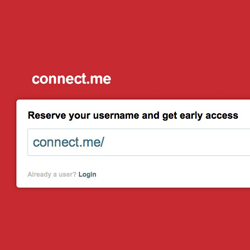 Every day we seem to warn the readers of the Naked Security site about the danger of rogue applications and unknown parties gaining access to your social networking accounts.

Scam apps claim – amongst other things – that you can find out who your top 10 stalkers are on Facebook, or how many hours you’ve spent on Twitter, or claim to offer up a video of a girl commiting suicide on her webcam.

The cybercriminals’ intention is to gain access to your social networking account, so that the can spread their links virally, and drive even more traffic to their money-making schemes.

And so you would think people would be wary of allowing a third-party app, which doesn’t explain its intentions and doesn’t explain who’s behind it, from gaining access to their Facebook or Twitter account.

But that’s exactly what thousands of people seem to be doing right now with Connect.me. And yet, oddly, no-one seems to know what Connect.me is. Not that that stopped some of them from signing up anyway.

Even Connect.me is declining to give away much information, describing itself as a “better way to manage your social connections” but admitting that it’s unable to share any more information as it’s currently in “ninja stealth mode”. Has Connect.me given you any reasons to trust it?
My question is this. Why should I trust these guys and grant them permission to post to my Twitter or Facebook pages? I don’t even know what their product is supposed to be!

And yet, thousands of folks appear to be signing-up without a second thought.

A little digging around reveals that a guy called Joe Johnston with a friendly beard is probably the brains behind Connect.me. But facial hair and a friendly smile is not enough to convince me that I should hand over the keys to my Twitter and Facebook account. Chances are that Connect.me may have no bad intentions, and that Joe is a nice chap, but I am extremely uncomfortable with the willingness of people to join a service which potentially exposes their social networking accounts when they have no idea what it is they’re signing up for.

Update: The controversy continues. Connect.me has responded to this article. See what Connect.me had to say, and let us have your opinion.