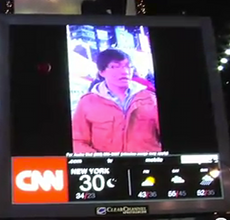 According to a wildly-popular video on YouTube, you can take over any video screen, any time.

All you need to do is to plug BITcrash44’s tiny transmitter into the headphone jack of your iPhone. This transmits a copy of whatever is playing on your iPhone’s screen to an equally-tiny companion device, called a repeater.

(Why not watch a few Sophos videos, too? Check us out on the SophosLabs YouTube channel.)

According to BITcrash44, if you place the repeater close to any video screen, it will “take over” that screen, replacing whatever is currently showing with the video signal from your iPhone.

At one point, the hoaxer duct-tapes his tiny repeater to a helium balloon and floats it upwards to “take over” a massive display screen located several metres above ground level.

It’s all a load of garbage, of course. There’s no “transmitter”, and no “repeater”. The YouTube video is just smoke and mirrors – a bunch of careful edits and effects.

This kind of hoax is mostly harmless, and is good fun to watch, because the video effects are cleverly and amusingly done. But when you stop to think about it, it’s obviously a hoax, not least because the headphone jack of an iPhone doesn’t provide video output at all.

(You should also question the amazing transmission energy of the “repeater”, which has no visible source of power, yet seems able to blast out enough electromagnetic radiation to “own” an apparently inexhaustible range of video displays, whether wireless or not.)

So don’t feel bad if you enjoyed and forwarded this hoax. You probably don’t even need to feel bad if you fell for it – many news sites seem to have done so. But you might want to view it again with a more cynical hat on, so you don’t fall for this sort of twaddle next time. Sadly, not all internet hoaxes are amusingly innocent.

Yesterday’s false radiation warning disseminated by SMS in the Philippines is a good example.

Don’t help fear-mongering hoaxes to get a grip.

With significant real risks ahead at Japan’s overheating nuclear reactors, the fake warnings in the Philippines caused needless fear and, even worse, desensitised people to any important official warnings which might appear in the future.

Rash actions on-line don’t benefit anyone. Don’t sign up for a brand-new social networking service before the operators have told you what it’s for; don’t panic if you receive an unsolicited support call from someone claiming to be from Microsoft; and don’t blindly “Like” sites on Facebook before you’ve even seen them yourself.

And if you are at all unsure, don’t input your details, don’t stay on the phone, and don’t click just to see what happens.