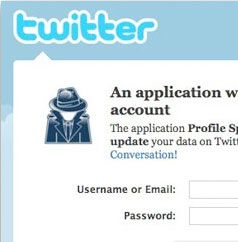 Twitter users are once again finding themselves on the receiving end of an attack more often experienced by their Facebook-using cousins: a rogue application attack spreading virally across the network.

Thousands of Twitter users have fallen into the trap of allowing a third party application called “Profile Spy” to access their Twitter accounts, after believing that they would be able to find out who has been viewing their tweets.

Wow! See who viewed your twitter with Profile Spy [LINK]

Of course, there’s no such way to tell who has been reading your Twitter posts – but that hasn’t stopped thousands and thousands of Twitter users from clicking on the link, and granting “Profile Spy” permission to post messages from their account. If you are foolhardy enough to allow the app to continue, you’ll find that you are instantly tweeting out messages to your Twitter followers, encouraging them to also click on the link.

In this way, the scam spreads virally and very quickly across the network.

The motive for the scam is, unsurprisingly, to make money for the scammers behind it. They pop-up a survey and demand that you complete it before they will reveal details of who has been viewing your Twitter messages. Hopefully by now all of your alarm bells will be ringing, but if you do continue to complete the survey you will be helping the scammers earn commission.

Don’t encourage the bad guys to distribute scams like this, and always exercise caution about which third party apps you allow to connect with your social networking accounts.