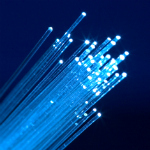 Did you see this?

The story about a 75-year-old Georgian woman who went digging for copper, sliced through an underground cable and cut off 90% of the internet services to Armenia? Azerbaijan’s services were also disrupted. Affected internet surfers were offline for about five hours.

She apparently found the cable while out on a metal dig, and cut into it with a view of selling the cable on.

Fibre optic cables are basically thin strands of glass that carry light. Data is converted into light at one end of the cable and then converted back into data at the other end. According to ehow.com, these cables are buried a typical 30-42 inches down. I can’t help but have these visions of a salt-of-the-earth granny with limited access to education or urban living, who looks a bit like the picture on the right (most likely without plastic surgery, wig or war paint), being paid by some nefarious wing of some underground organisation to cut the cable and use the digging-for-precious-metal story as a cover.

I mean, who needs to pay a bunch of cyber warriors to wreak havoc on a nation’s infrastructure when you can use a single granny with disproportional brawn and get the job done before lunch?

Or maybe she just had enough of people walking around, head bowed, typing into their smartphones, ignoring the splendid views of Ksani, Georgia. So she thought she would teach them a lesson.

You couldn’t make it up 🙂