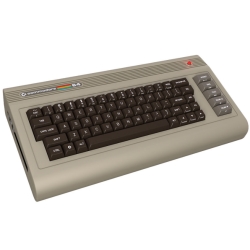 I can’t be the only nostalgic nerd to feel a flutter of excitement at the news that a home computer from yesteryear is making a comeback.

The Commodore 64, the classic retro home computer which was initially released in 1982, is reportedly making something of a return as the company is squeezing a Windows PC inside the original shell.

The new computer will ship with Ubuntu, but an emulator capable of playing classic games from the 1980s is also promised.

How neat is that!?

So, to all intents and purposes – it looks just like an old Commodore 64 computer… ..well, until you have a look around the back at least. The USB slots and HD TV connections are a bit of a giveaway in my opinion.. And memories of the Commodore 64 got me thinking. What about computer viruses?

Although viruses were largely a PC and Mac issue in the latter half of the 1980s, there was also malware written for other types of computers. And the Commodore 64 is no exception.

For instance, the C64/BHP-A virus appeared in 1986. It wasn’t just a virus capable of infecting files on Commodore 64s, it was also fully stealth – effectively exploiting the Commodore 64’s memory structure to “act invisible”.

These were the days before financially-motivated malware, of course, and the BHP virus’s payload was to display a message on the screen surrounded by a colourful border: I’m loathe to suggest that anyone deliberately run a virus on their shiny new computer, but it would be fascinating to know if the emulator being used on the revamped Commodore 64 is capable of running C64/BHP-A.

So, can we expect a revival of Commodore 64 viruses? I seriously doubt it. But it is quite fun to remember the early days of computer viruses, when everything seemed so much more innocent.

If you want to read more about this Commodore 64 virus, I can highly recommend a technical article by security researcher Peter Ferrie, published in Virus Bulletin in January 2005.

And if you want to learn more about the “new” Commodore 64, make sure to visit Commodore’s website.

14 comments on “Commodore 64 viruses – time for a comeback?”