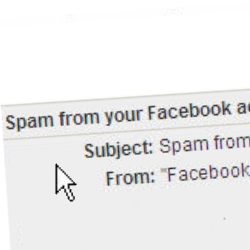 Computer users are discovering malicious code has been sent to their email inboxes, pretending to be a notification from Facebook that their social networking account has been used to send out spam. Please do not reply to this email, it's automatic mail notification!

The attack would, perhaps, be a little more successful at fooling more people if it had gone through a grammar check and if the perpetrators had paid more attention to the fact that it’s spelt “Facebook” not “FaceBook”.

Nevertheless, there are doubtless some computer users who might be tempted to open the attached ZIP file and infect their computers with malware.

We’ve seen similar attacks before, of course – and I imagine that cybercriminals will continue to use ruses like this when spreading their malware. Plenty of people are hooked on Facebook, and a message telling them that their password has been reset is likely to send them into palpitations and they may open the unsolicited attachment without thinking.

After all, it’s not as though spam being sent from Facebook accounts is unusual.

If only more people realised that they cannot trust the “from:” address in an email, as it is so easily forged. In this case it presents itself as being from "Facebook Help" <official@facebook.com>, but in reality it could just as easily be a Hungarian hacker, a Finnish fraudster or a Serbian scammer who initiated the widespread spam attack.

If you are one of those many people who can’t get enough of Facebook in their lives, can stay informed about the latest scams by joining the Sophos Facebook page, where more than 70,000 people regularly share information on threats and discuss the latest security news.