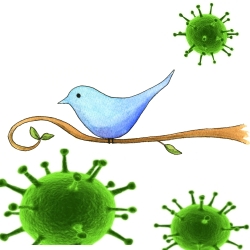 Once again Twitter users are finding themselves hit by a fast-infecting attack, more commonly encountered by their Facebook-using cousins: a rogue application spreading virally across the network.

Thousands of Twitter users have fallen into the trap of allowing rogue third-party applications access their Twitter accounts, believing that it would tell them how many people have unfollowed them. See the hashtags? They appear to be currently trending phrases on Twitter – presumably the rogue applications are using them in the messages they spam out in an attempt to trick more users into clicking on the links. Don’t, whatever you do, press the “Allow” button. If you do, then a third party is now capable of tweeting messages in your name to all of your Twitter followers – which spreads the scam virally across Twitter and may result in one of your online friends also having their account compromised.

So, how do the scammers make money? That’s the next piece of the jigsaw.

You’re anxious to find out who has unfollowed you on Twitter. The scammers take advantage of that by presenting a webpage which looks as if it’s about to reveal that information – but is actually designed to make you take an online survey instead. The scammers make money for each survey that is completed.

(Note that the scammers are using a variety of different applications – so you may see a different name from the one I picture above).

4 comments on “Unfollowed Me rogue application spreads virally on Twitter”