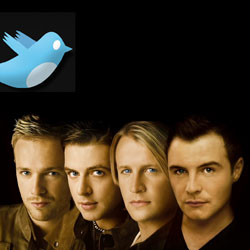 Kian Egan, a singer with the Irish boyband Westlife, has been forced to deny that he is leaving the chart-topping pop group after statements were posted on his Twitter account.

Egan had over 60,000 followers on Twitter, and the news would surely have plucked the heartstrings of his many young female fans: it took my a very long time to come to this conclusion. I have had an amazing 12 years with the boys and wish them the best of luck in the future. The boys are going to continue as a three piece.

Egan claims, however, that the tweets were posted by a hacker who compromised his @KianEganWL account, which has subsequently been suspended.

He took to the Twitter account of his singer/actress wife Jodi Albert to blame a hacker for the posts announcing his retirement from Westlife.

But if we take Kian Egan at his word, and believe that he was indeed hacked on Twitter, then he would be wise to take steps now to prevent it from happening again.

Here’s a video where I describe how to choose a stronger password. Unfortunately it’s not like a Westlife video, as I don’t step up from my stool and make a dramatic key change towards the end..

3 comments on “Is Kian Egan leaving Westlife or has he been Twitter hacked?”