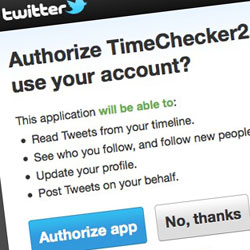 Another rogue application is spreading between unsuspecting Twitter users, claiming to tell you how many hours you have spent on on the network.

The messages all look pretty similar, and use a currently trending topic such as Richard Dawkins, Cheryl Cole landing the job of a judge on the US edition of “X Factor”, or it being Mother’s Day in the United States.

Even though you may have seen one of your friends tweet out a message like this, you definitely shouldn’t click on the link. It will take you to a rogue third-party application which asks your permission to connect with your Twitter profile. If you do authorise the app it will be able to post messages to Twitter in your name, see who you follow on Twitter, grab your Twitter name and avatar, and update your profile. Now, why on earth would you want to give a complete stranger the ability to do that?

Unfortunately, you may be so desperate to find out how many hours they have spent on Twitter (after all, your friends appear to have already been though the process) that you will authorise the application.

Whereupon, the rogue application will tweet the offending message from your Twitter account. When I went through the process on a test Twitter account I run, I found that it tweeted out the message more than a dozen times in less than 30 seconds. You may not realise that this is happening, however, as the app is distracting you with a message saying it is processing your results. After some whirring away, it asks you to enter your email address to have your results sent to you. Stop right there! (if you haven’t already). Are you seriously going to give these complete strangers access to your email address too? They already know your Twitter account name, and can post to your Twitter page – now they’ll be able to email you as well!

Who knows what they might send you? Their plan might be to send you spam, a Trojan horse, or a phishing attack. They even have the cheek to say watch out for the message in your spam folder!

I don’t know what the scammers plan to spam out to you, and it could – of course – be weeks or months before they do, but if you want to find out more follow me on Twitter at @gcluley.

These sorts of rogue applications appear to be popping up more and more on Twitter, whereas previously they were mostly seen only by Facebook users.