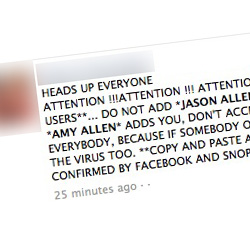 A new virus hoax is spreading on Facebook, shared by well-intentioned users who believe they are warning their friends and family about a threat – but, in reality, are just adding to the noise.

Messages being shared across Facebook warn users not to add as a Facebook friend people called “Jason Allen” or “Amy Allen”. Here are some of the versions of the chain letter message we have seen:

ATTENTION ALL FACEBOOK USERS;IF SOMEONE WITH THE NAME JASON ALLEN OR AMY ALLEN TRIES TO ADD YOU..DO NOT ACCEPT.IT IS A VIRUS.TELL EVEYBODY BECAUSE IF SOMEONE ON YOUR LIST ADDS THEM YOU WILL GET THE VIRUS TOO.COPY PASTE AND RE-POST THIS.THIS HAS BEEN CONFIRMED BY FACEBOOK SNOPES..

The truth is that this is a hoax. You’re not really doing others a favour at all if you post or forward the warning to other Facebook users. It’s just the latest example of the many hoaxes we have seen spreading over the internet for some years. Just last month we saw a very similar virus hoax spreading on Facebook, but using the names Jason Lee and Linda Smith rather than Jason and Amy Allen.

If you think about it, a warning about Facebook users called “Amy Allen” and “Jason Allen” isn’t actually that helpful. After all, just imagine how many people have names like that! And if users called that weren’t up to no good, and saw the warning being spread about them, wouldn’t they just change their online names?

Furthermore, according to the warning, Facebook is said to have confirmed the threat. If that’s true, then precisely where has Facebook confirmed it? Why is there no link in the warning where people can discover more about the threat?