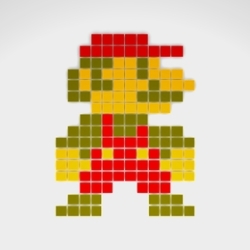 Fancy a game of Super Mario for free? Well, be careful – because although you may not have to pay any money for it, you might just be giving away a lot of your private data.

Blogger David Rogers has described how he stumbled across something interesting on the Google’s Chrome web store – a playable Super Mario app that – can also access data from all the websites you visit, your browsing history, and your bookmarks.

If you were a fan of Nintendo’s dungaree-wearing moustachioed Italian plumber, would you bother to read the small print or just be terribly excited at the prospect of playing “Super Mario World” in your browser? Of course, these apps (technically they’re browser extensions rather than apps..) aren’t endorsed or developed by Nintendo, and by downloading and playing these pale imitations you’re only encouraging others to rip-off the hard work of genius game developers from yesteryear.

Nintendo’s PR department got in touch with me to emphasise the point:

"Nintendo video games are offered only on Nintendo systems such as the Wii and Nintendo 3DS. Applications on the Apple or Google marketplaces that purport to be Nintendo video games are not legitimate and users who download these applications may expose themselves to spyware or other malicious software. Nintendo actively monitors the unauthorized use of its intellectual property, and will continue to seek removal of any unauthorized content in these marketplaces. In this case, Nintendo worked with Google to have the applications removed."

But more than just supporting copyright thieves, you could find that the lure of a video game classic could be being used to rip off data about you. Think of that next time your eyes glaze over when faced with small print about what an app is really going to do.

It appears that Google has now removed the errant apps from its Chrome Web Store, but one wonders how many other apps and extensions are designed to slurp up more of your data than reasonably expected.

There’s no indication that the unauthorised Mario games in the Chrome Web store are intentionally malicious, but they’re certainly playing pretty loose in terms of the data they want to access.

There have, of course, been viruses that have posed as Nintendo games in the past.

For instance, on the Windows platform a few years ago we saw the Romario worm, which launched one of the classic Super Mario Bros games, starring the starring the portly Italian plumber. What would Princess Peach have to say about such shenanigans?