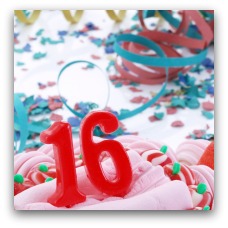 Popularity is pretty important to many 16 year olds, but perhaps this story highlights that being too popular can suck in a BIG way.

A north-German teen, known as Thessa, was planning her 16th birthday party. Like many of us, she decided to use Facebook to invite her pals.

Unfortunately, Thessa’s invite was sent not only to her connections, but to everyone as a public event.

Before you groan and think her stupid, check out the screenshot of Facebook’s Create an Event page below.

It has “Anyone can view and RSVP (public event)” ticked by default. Now, surely this is a great feature for a promoter or marketing outfit, but pretty awful for the half a billion or so home users who use Facebook to stay in touch with their friends and relatives. I can see why someone might think that “Anyone” refers to all the people a user is connected with, rather than all Facebook users. Within a few hours, a staggering *15000* Facebook users had RSVPed for the Friday night party. That would put serious fear into any party organiser, let alone a soon-to-be sweet sixteen.

A cancellation notice was quickly fired out, but was ignored by the estimated 1500 people that showed up to her parents’ home in Bramfeld, just north of Hamburg, Germany.

Thessa’s parents reportedly hired a security firm to help them handle the expected masses. Also on hand were 100 police officers, some on horseback, to help keep the peace. They cordoned off the girl’s home, but party goers danced, chanted and drank at its edge.

There are a number of amateur videos of the birthday frenzy on YouTube, but I think this one captures it (the nightmare for the neighbourhood and glee of the attendees) rather well:

While no serious violence has been reported, some media reported that more “enthusiastic” partiers vandalised vehicles nearby and set fire to garbage bins and even a garden shed.

11 arrests were made. And the icing on the cake? Tessa didn’t even get to enjoy any part of it, as she was hiding out at her grandparents’ house.

A recent Comscore report shows a whopping 59% decline in the use of email among 12-17 year olds, and a 34% decline for the 25-34 age brackets. Facebook, SMS and Tweets have taken over as preferred communication methods.

For all you Facebook users out there, let this be a wake-up call. Check settings carefully before you issue invitations. More information on how to review your Facebook settings is available on the Sophos website.

And Thessa – from us at Naked Security: Happy 16th. Hope the year is a happy one for you 🙂