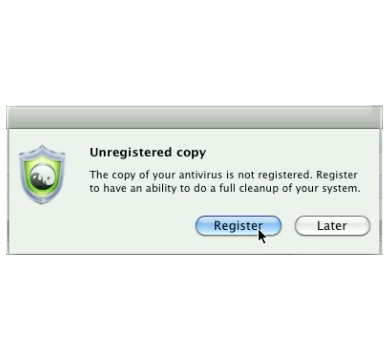 More Mac scareware appeared overnight, with the cybercrooks following the same sort of strategy which has worked so well on Windows: regularly change the look and feel of the fake anti-virus software; use legitimate-sounding brand names (or steal genuine product names); stick to a price-point between $50 and $100; keep the fear factor high; but keep the core programming very similar so development costs are negligible.

Scareware, or fake anti-virus, is fake security software which pretends to find dangerous security threats – such as viruses – on your computer. The initial scan is free, but if you want to clean up the fraudulently-reported “threats”, you need to pay.

Once you’ve paid, the scareware stops lying to you about the non-existent threats, as though it really did clean them up. This means that many victims of this sort of fraud don’t even realise they’ve been duped. Until next time.

These latest OS X scareware variants come from the MacDefender stable, though they identify themselves during startup as Mac Shield:

Once activated, the software pretends to look through your files, pretends to find malware, and invites you to clean up:

But the cleanup isn’t free – you’re required to register:

Registration means payment. The minimum you can get away with is $59.95. But for just $40 more, you can get a lifetime software licence and lifetime support – which would be a good deal, were it not for the fact that the software is completely fraudulent, that the “lifetime” of the software ends tomorrow when the crooks move on to the next bogus brand name, and that there’s nothing to support, since there was no malware in the first place.

You even get a 30-day money back guarantee. Good luck claiming it.

Here are some top anti-scareware tips for Apple users:

* If you use Safari, turn OFF the open “safe” files after downloading option. This stops files such as the ZIP-based installers favoured by scareware authors from running automatically if you accidentally click their links.

* Don’t rely on Apple’s built-in XProtect malware detector. It’s better than nothing, but it only detects viruses using basic techniques, and under a limited set of conditions. For example, malware on a USB key would go unnoticed, as would malware already on your Mac. And it only updates once in 24 hours, which probably isn’t enough any more.

* Install genuine anti-virus software. Ironically, the Apple App Store is a bad place to look – any anti-virus sold via the App Store is required by Apple’s rules to exclude the kernel-based filtering component (known as a real-time or on-access scanner) needed for reliable virus prevention.

* Religiously refuse any anti-malware software which offers a free scan but forces you to pay for cleanup. Reputable brands don’t do this – an anti-virus evaluation should let you try out detection and disinfection before you buy.

In a recent Sophos poll, 89% of respondents said they’d recommend their Mac-owning friends and family to use anti-virus software. Why not take their advice, and get Sophos Anti-Virus for Mac Home Edition today?

It’s free – no registration, no signup, and no password needed. It detects, prevents and cleans up malware infections.