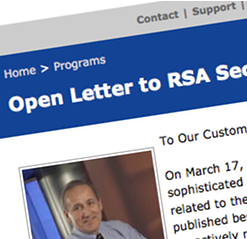 The internet is abuzz with news that beleaguered security company RSA, which suffered a security intrusion and theft of trade secrets back in March, is offering to replace its customers’ security tokens.

The simplest sort of token generates and displays a sequence of pseudo-random numbers, with a new number appearing every minute or so. You enter this ever-changing number as well as, or instead of, your regular password.

The theory behind time-based token authentication is that only your authentication server and the token itself can reproduce the pseudo-random stream. So, if you don’t have possession of the token, you’ll never know the password-of-the-minute.

And if a crook should shoulder-surf or keylog your current token number, it’ll be worthless next time. That should make you much more secure than relying on a password you use over and over again.

But one concern over RSA’s security breach was that some of the trade secrets stolen might allow cybercrooks to work out a token’s pseudo-random number sequence. Of course, this would destroy the very foundations of RSA token security.

RSA didn’t do itself many favours when it first commented on the breach, playing its cards rather close to its chest and not saying much more about the ongoing security of its tokens than:

Sadly, RSA’s confidence may have been misplaced, with recent attacks on US defence contractors linked with the compromise of RSA token security.

Under this sort of pressure – and perhaps still reluctant to give away too many technical details for fear of making a bad thing worse – RSA has just announced a free replacement plan for users of its tokens.

That’s going to be a big job. But is it going to be quite as big as PC World suggests when it says that RSA “will replace [SecurID] tokens for any customer that asks“?

RSA’s open letter on the subject isn’t quite as clear-cut.

It looks as though RSA will only replace your tokens for free if you are a customer: Those sound rather like weasel-words to me. What is a “concentrated user base”? If you directly protect your own corporate network, are you covered? Or is RSA only offering to cover you indirectly, as the customer-of-a-customer, by helping your reseller?

What if you’re a boutique ISP with a webmail service who has taken the extra step of offering selected users two-factor authentication? Is your user base concentrated enough? Are you protecting intellectual property, or just casual chatter?

And if you do swap out your old tokens, will you be given enough information to satisfy yourself that the new tokens don’t have the same flaws as the old ones?

What do you think? Take part in our poll – and be thankful you’re not working in one of RSA’s call centres or help desks right now!