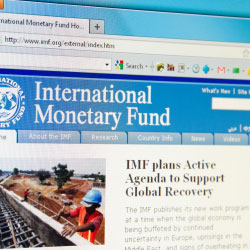 The International Monetary Fund (IMF) has suffered a major hack, according to media reports this weekend.

The organisation, already making the headlines following the arrest and resignation of its boss Dominique Strauss-Kahn (whose alleged perpetration of a sexual assault has itself been used as springboard for malware attacks), attempts to oversee financial crises around the world and promote economic development.

According to a New York Times report, senior sources within the IMF confirmed to the newspaper that the organisation had suffered a “very major breach” and was deemed serious enough to cut a computer link between the IMF and its near neighbour in downtown Washington, the World Bank.

A World Bank spokesman is reported by the New York Times to say that the disconnection was taken out of “an abundance of caution” until the nature of the attack on the IMF, was understood. The link was apparently quickly restored, and no attack on the World Bank is said to have occurred.

Bloomberg, meanwhile, claims to have got its hands on a series of internal emails and memos distributed to IMF staff, warning them that computer systems had been compromised by hackers:

"Last week we detected some suspicious file transfers, and the subsequent investigation established that a Fund desktop computer had been compromised and used to access some Fund systems. At this point, we have no reason to believe that any personal information was sought for fraud purposes."

Furthermore, the IMF is said to have told staff on June 8 that it would be replacing their RSA SecurID tokens, used for authentication.

Inevitably, speculation is likely to rise that the attack on the IMF may have been connected to the recent security breach at RSA (which has, in turn, affected the likes of Lockheed Martin and possibly other military contractors) however, an IMF source is said to have told the New York Times that no such link is suspected in this attack.

It seems a single day can’t pass without a well-known institution making the headlines for being the victim of a hacking attack or loss of sensitive data. All organisations need to take the seemingly growing tide of internet attacks as a warning sign, and ensure that they have strong defences in place and that every member of staff has been trained in best practices to reduce the risk.

You can read more about the alleged hack in these New York Times and Bloomberg reports.