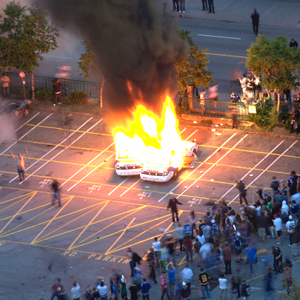 Last night, the Stanley Cup Final was played here in Vancouver between our team, the Canucks, and the Boston Bruins. This morning Vancouver was in the news but for all the wrong reasons.

Following the Canucks’ defeat at the hands of ueber-goalie Tim Thomas and his men, a riot occurred.

Over the course of three hours, shops were looted, property vandalised and cars set on fire in a small area of downtown Vancouver. Sophos is located right in the middle of the trouble area so we were all faced with the aftermath as we arrived for work this morning. Over 100,000 people were out on the streets during the evening, watching the game on big-screen TVs set up by the City. It was a small core of troublemakers – no more than 100, it seems – who caused the bulk of the damage.

But watching the events unfold on the live TV coverage I was struck by how many people were on the periphery, larking around, taking photos and laughing as the destruction continued.

Although the vast majority of Vancouverites are disgusted and embarrassed by what went on, it seems clear that those who laughed at the violence contributed to the problem. Without an audience egging them on and getting in the way of attempts to stop them, the riots would have fizzled out much sooner.

What’s any of this got to do with computer security?

In the cyberworld, there is a group of criminals currently going around apparently unimpeded, attacking legitimate businesses and endangering the privacy and livelihoods of their customers. I’m talking about LulzSec, of course.

Just like the Vancouver looters, LulzSec are moving from site to site, launching pointless attacks and putting the livelihood of corporations and the privacy of their customers at risk. The effects of their activities are going to impact more people than some broken shop windows up here in our corner of Canada.

Here on Naked Security yesterday we held a poll to gauge readers’ reactions to the activities of LulzSec. The result was that a large number of people thought LulzSec’s activities were funny – they were just having a bit of a laugh.

Would those people also find the actions of these criminals here in Vancouver funny? I hope not.

Computer crime and attitudes to security from threats online are still seen as less serious than physical crimes. This isn’t surprising – it’s easier to respond to things we can see and understand. But with so much of our wealth and livelihood tied up in computers, networks and online services it’s time we stopped thinking like that and started taking the virtual world seriously.

P.S. The rivalry between Sophos’s offices in Vancouver and Boston was almost as intense as that on the ice. Bets were laid, involving promises to donate money to local charities. As a result of Boston’s victory, staff at Sophos Vancouver have pledged at least $500 to help victims of the recent tornadoes in western Massachusetts.

8 comments on “Riot in Vancouver – how funny was it?”