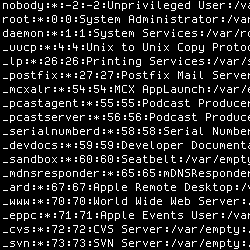 With all the data breaches in the news lately, it’s hard to know whether you’ve been affected.

You could just change all your passwords after every reported breach – just in case. You could insist on tokens for everything. (Of course, that might raise additional concerns.) You could stop using the internet entirely. Or you could do nothing.

Cybercrime happens to other people, right?

Another approach is to keep trawling the internet for exposed password databases, grabbing copies and checking to see if you’re on anyone’s “hit list”. Of course, it doesn’t tell you much if you’re not in one of LulzSec’s or Anonymous’s triumphantly-publicised leaks. But if you are, then you’re facing a clear and present danger.

After LulzSec’s recent spray of 62,000 passwords, Twitter came alive with LulzSec hangers-on announcing the malevolent uses to which they’d quickly put the leaked data – such as sending a large pack of condoms to a random woman using someone else’s money, or trying to break up relationships by posting fake information on Facebook. Very funny.

So a large part of the risk posed by these allegedly-amusing data leakage incidents comes not from traditional cybercrooks, but from a plethora of not-so-innocent bystanders.

Of course, continually chasing down hacked password lists and downloading them to see if you’re there is not only a hassle, but also creates a somewhat circular dependency on the hackers themselves.

Fortunately, thoughtful Sydney infosec technologist Daniel Grzelak can help you keep track of the latest breaches, so you don’t have to.

(See how much nicer it is to hack to help, rather than to break?)

You can see if you’re in any of a number of recently-spilled leakages by simply searching for your email address at:

Daniel doesn’t store your email address after you’ve looked it up – so he can’t spam you even if he wanted to, which he doesn’t – and he’s not accumulating a list of email addresses which spammers might like to break in and steal. And he doesn’t keep any of the stolen databases on his server, so he’s not offering a handy-to-hack repository for unlawfully-acquired loot, either.

As I mentioned above, a green light from Daniel’s website isn’t a clean bill of health. It just means, “You may proceed to the next intersection.” But if you get a red light about a recent breach, you should fix your passwords as soon as you can.

(And remember that the data probably wasn’t stolen from you, but from someone you trusted to keep it safe. You might want to rethink that relationship at the same time.)

If you need to change passwords, but you’re struggling to do better than “123456”, “secret” or “monkey”, please watch this video first:

8 comments on “LulzSec, Anonymous and other hacks – should I change my password?”