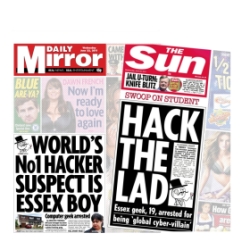 The arrest of a 19-year-old man suspected of being connected with the LulzSec internet attacks against various organisations has certainly made the headlines.

Here’s a selection of today’s front pages here in the UK. Of course, it’s worth bearing in mind that it’s rarely the journalist who choose the headline for the story. As Dan Raywood, a security reporter with SC Magazine, pointed out on Twitter, The Sun should win a special accolade for getting the words “geek, nerd and oddball in the first 100 words” of their report.

Meanwhile the Daily Mail portrays the teenager as a “cyber terrorist” on its front page, alongside a school picture of the suspect taken when he was just 13 years old. I couldn’t find the T-word in their online report, however.

The Daily Mirror and the irritatingly monikered “i” portray Ryan Cleary in ways we’ve come to expect from the media: “World’s No 1 hacker suspect” (and an interview with his mum) and “teen cyber mastermind” respectively. I humbly suggest that chances are that Cleary will turn out to be neither of those things.

The Times is more conservative, with the factual “Essex teenager linked to wave of global hacking”, and the Financial Times finishes off our round-up with “Police arrest suspected CIA hacker” (No matter that the CIA didn’t get hacked – it got denial-of-service’d, such technicalities are too complicated for the front page of a newspaper).

My guess is that this isn’t the end of the story – no doubt there will be more headlines to come.