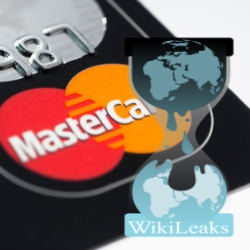 In what appears to be the latest salvo by hactivists, the mastercard.com website is thought to have suffered from a denial-of-service attack – where an internet site is bombarded with a large amount of traffic making it impossible for genuine visitors to access it.

A Twitter user called ibomhacktivist seems to be taking responsibility for the attack, and links the action to the WikiLeaks-inspired attack on MasterCard by the Anonymous group last year.

MasterCard.com DOWN!!!, thats what you get when you mess with @wikileaks @Anon_Central and the enter community of lulz loving individuals 😀

MasterCard angered the hacktivist community after it suspended the ability for WikiLeaks to accept payments via the firm. Police in the Netherlands arrested two teenagers for allegedly playing their part in the attacks last year.

WikiLeaks is a subject which tends to generate strong emotions – whether you’re in favour of what the organisation stands for, or against it.

Computer users would be wise, however, to remember that even if you feel WikiLeaks is being persecuted by the authorities or abandoned by online companies, denial-of-service attacks are still illegal.

I’ll update this article with more information as it becomes available, or alternatively follow me on Twitter.

Update: The MasterCard.com website appears to be back online. It will be interesting to see if it stays up, or whether it will sporadically disappear again. Fingers crossed.

Update 2: MasterCard has issued a statement, reported by the Wall Street Journal and others.

Here’s what they have been telling the press:

We can confirm that MasterCard's corporate, public-facing website experienced intermittent service disruption, due to a telecommunications/Internet Service Provider outage that impacted multiple users. It is important to note that no cardholder data has been impacted and that cardholders can continue to use their cards securely. We are continuing to monitor the situation closely.

It’s good to hear that no cardholder data was impacted (although, of course, no-one suggested that it was).

What I find particularly interesting, however, is that MasterCard uses some rather interesting wording to describe its downtime which avoids the topic of a possible denial-of-service attack but doesn’t actually deny it either.

Maybe there was a more down-to-earth reason for the downtime, and maybe there wasn’t a denial-of-service attack. But if that is the case, it’s surprising to not see the company be more definitive about what actually did or did not occur.

2 comments on “MasterCard.com brought down in apparent Wikileaks-motivated internet attack”