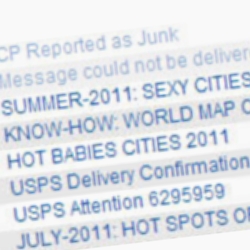 Would files with names like Love-Spots.bat, map-of-love.com, and Love-Map.com pique your interest? If so, your behaviour could be putting your computer’s security at risk.

Cybercriminals are spamming out a malicious Trojan horse in large numbers right now, using a variety of sleazy disguises to trick the unwary into opening the attachment.

Opening the emails will see the seedy theme continue: But don’t, whatever you do, opening the attached files. In reality it’s not a map of the world’s hottest women, or even a report of a failed parcel delivery. The attached file is a Trojan horse called Troj/Agent-RNY, designed to download further malicious code from the internet onto your Windows computer.

I can’t believe that anyone who receives these sleazy emails believes that they were intended to be sent to them. The recipients must know that they are either spam or have been accidentally sent to the wrong address.

So the question is this. Why oh why do people put their computer’s security at risk by opening the unsolicited attached files? Such dangerous behaviour doesn’t just put your own identity and the data held on your computer in peril, but it also opens up opportunities for malicious hackers to target other innocent internet users too.

4 comments on “Sleazy subject lines spammed out with malware”