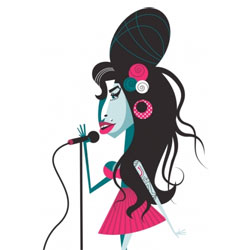 A hacking group calling itself SwagSec has broken into the official website of singer Amy Winehouse and defaced it by posting an expletive-filled message and an image of the rapper Lil’ B.

The hacking gang, which according to its Twitter feed claims to be based in South Africa, describes the troubled singer as a “Racist crackhead devil b****” and says it plans to “take back the Internet from the white devil.” At the time of writing, Amy Winehouse’s official website is redirecting to her Facebook page. Presumably her website administrators are keen to take the site offline until they are confident that it is now properly secured.

It’s more bad news for the beehive-wearing Winehouse, who earlier this month cancelled future tour dates after a disastrous comeback performance in Belgrade.

We have to be grateful, of course, that the attack appears to have been more akin to mindless graffiti, than an attempt to plant malware on a popular singer’s internet site.

The only small consolation for Amy Winehouse is that she’s not the first singer to have suffered from website hackers.

For instance, in 2009, Paul McCartney’s official website had malicious code planted on it by hackers which downloaded code to spy on users as they logged into their online bank accounts.

Perhaps the most bizarre story of a musician having his website “hacked”, however, is that of Van Morrison.

At the end of 2009, it was widely reported that Irish singer-songwriter Van Morrison had had a child with American record producer Gigi Lee, after a statement announcing the birth of George Ivan Morrison III was published on the music legend’s website.

You would expect that this wasn’t news welcomed by Van Morrison’s wife Michelle. And the singer quickly claimed that the announcement was bogus and the result of hackers breaking into his website.

It seemed like a tall story at the time to blame the announcement conveniently on hackers, and can be considered even more so if you read this deeper investigation by the Mail on Sunday.

Regardless of Van Morrison’s possibly tangled love life, and Amy Winehouse’s battles with addiction, there’s a message for all of us in the latest website hack.