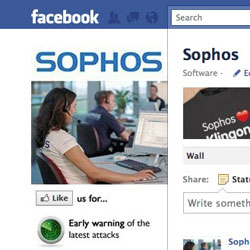 At about 10 o’clock last night, UK time, we honked a horn here at Naked Security in celebration.

Not because it was July 4th and US Independence Day (although, we’re very happy to raise a glass to our American readers for that) but because Sophos passed a milestone on its Facebook page.

Sure, it doesn’t really compete with the likes of Lady Gaga or Justin Bieber, but it’s a pretty impressive figure for a company like Sophos which sells purely to businesses.

For a long time, in the dark days of 2009 and early 2010, Sophos’s Facebook page only had a few hundred users – and most of them were our employees.

Frankly, I was beginning to think that Facebook wasn’t going to be that important to Sophos and that we should concentrate our efforts on engaging with folks via Twitter instead.

How wrong I was. Because we found a staggeringly simple formula for making our Facebook page attractive to the public: Share useful information with people.

While many other Facebook pages use gimmicks and prizes to lure people into becoming fans of them (but in reality their new “fans” are unlikely to be properly engaged and are only joining for a one-in-a-million chance to win a luxury car or $0.25 off their next coffee), we discovered that many regular users of the internet appreciate receiving timely advice about new security threats via Facebook. It makes sense when you think of it – few people are going to be interested in reading a corporate press release you’ve put on Facebook or a blatant advert for your software. But folks will find information about a new fast-moving threat or a link which debunks a hoax useful.

Do you see when things really begin to kick off for Sophos’s Facebook page in May 2010? There’s a reason for that.

That was the month when messages about the “Sexiest Video Ever” and “Distracting Beach Babes” spread rapidly and virally cross the social network, tripping up many Facebook users.

Because we shared information about the attacks on our Facebook page, we collected a lot of new fans.

And it wasn’t just teenagers who were liking us either. The top secret anonymised demographic stats show that we have a healthy skew towards fans in their 30s or early 40s, and an even split between the sexes. And one of the great things about the Sophos Facebook page is that it gives us an opportunity to get feedback from our readers – so thanks to everyone who has left a comment up there, or shared a warning with their friends in the hope of making the internet a safer place.

Thanks to everyone who has become a fan of Sophos on Facebook so far. We hope it’s helped make your use of Facebook and the general internet safer.

Update: Well, you’ve got to say that this is ironic timing. Shortly after I posted about our page on Facebook, the page was taken down! Sorry, this profile is not available at the moment. Please try again shortly.

We’ve contacted Facebook, and are hoping that this is a temporary glitch on their part. Was it something we said or is this something that is affecting other pages on the site?

Update 2: Our Facebook page has returned. Huzzah! Although some may be tempted to believe in a conspiracy theory as to why the Sophos Facebook page vanished for a while, we think there’s likely to be a more down-to-earth reason.

For instance, maybe Mark Zuckerberg’s mum wanted to vacuum his room, and had to unplug one of his servers for a while.