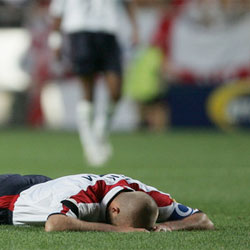 The website of British football superstar David Beckham has been hacked, with an image of a hapless dog attempting to eat a bowl of food painted on a street sign. A message on the picture reads

To be fair, Beckham probably has other things to distract him than his website’s security right now. Yesterday, his celebrity wife Victoria Beckham gave birth to a daughter, who they have decided to name – in the style of a science fiction android – Harper Seven.

That does mean, of course, that more people than usual might be visiting Beckham’s website in the hope of reading more information about their happy event.

Fortunately it appears that this particular hack is more about defacement than being malicious – if those who broke in had chosen to, they could probably have inserted malicious code into David Beckham’s website to install malware onto visiting computers.

And, in all seriousness, I doubt that David Beckham is a dab hand with an HTML editor and cascading style sheets, and he probably hires other people to maintain his website and be responsible for its security.

This isn’t the first time, of course, that a footballer’s website has been hacked. For instance, Diego Maradona was dubbed a “cry-baby” after his website was hacked by a Peruvian football fan in 2009.

And earlier this year, a hacker defaced Ronaldinho’s website with pictures that compared him to Star Wars hate figure Jar Jar Binks and Osama bin Laden.