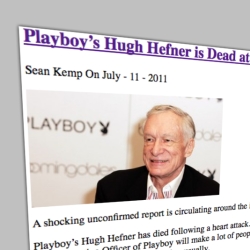 Hugh Hefner is the latest celebrity to have been dogged by rumours of his death, spreading across the internet.

Social networks such as Facebook and Twitter were abuzz with news of the demise of the iconic founder of Playboy magazine, who has recently had a little trouble in matters of the heart when his Playmate fiancee Crystal Harris called off their wedding.

According to reports, Hefner was said to have died of a heart attack on Monday 11th July at 10:58PM EST.

Would you have believed the reports from your social networking friends, or gone hunting for further confirmation?

After all, in the past we’ve seen internet rumours spread about the supposed death of Christian Slater and Tom Cruise. Furthermore, neither Johnny Depp nor Harry Potter starlet Emma Watson nor Kanye West have died in a car crash either. A website called ThinkRichMusic may have been partially responsible for stirring up the frenzied reporting of the dressing gown-wearing octogenarian’s demise with its over-excitable reporting: Cynics may wonder if a website might be willing to post a false story about the death of a celebrity in order to receive a flood of traffic from social networkers, trying to confirm the news.

I’m pleased to see that ThinkRichMusic has now posted an addendum to its article saying that Hefner is not dead. But I wonder how many people scroll down that far..

I think there’s an important lesson for all internet users, to get their news from well-established news sites. On too many occasions we have seen malware being distributed from poisoned webpages that claim to contain breaking news or shocking videos featuring people in the headlines.

Fortunately, the news of Hefner’s death was false, and the founder of Playboy magazine turned to Twitter to announce, in the style of Mark Twain, that the rumours of his death were greatly exaggerated.

Hefner, ever the self-publicist, also couldn’t pass up the opportunity to point out that not only was he far from dead, but he was also “lying in bed” next to his new Playboy model girlfriend Shera Bechard with a “big smile on [his] face”.

Some things never change. Another thing which won’t change is cybercriminals taking advantage of internet memes and breaking news stories – whether they be based in truth or utter nonsense.

Be on your guard.