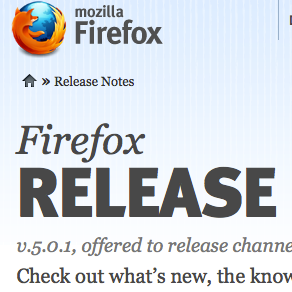 Mozilla released an update to Firefox 5 yesterday – but for Mac users only. This takes Mac users of the popular browser to version 5.0.1. Everyone else stays at 5.0.

This isn’t really a security fix: it deals with two reliability problems. One of these (Firefox crashes when using a downloadable font) manifests itself only on OS X 10.7, which isn’t out yet; the other (the Java plugin stopped working after Apple’s last Java update) affects only users of OS X 10.5, which is the previous version of Apple’s operating system.

Users of Apple’s current release of OS X, 10.6, aren’t affected, but get the updated release of Firefox anyway.

Confused? Don’t worry: the next scheduled update to the “release” version of Firefox is listed for 16 August 2011 – actually 17 August in much of the world – when Firefox’s new rapid development mechanism will bump everyone up to version 6.

Unless, of course, there’s a security update in the meantime. Presumably, if there is another emergency bugfix before V6 comes out, Mozilla will move the version number on all platforms to 5.0.2, just to keep things aligned.

Crashes, such as the OS X font problem in OS X 10.7, always imply some security risk, of course – whenever a program takes an uncharted and unexpected path of execution, there is cause for concern.

It’s good to see that Mozilla is willing to produce this sort “between-the-train-stations” release, despite the proximity of the next version.

7 comments on “Firefox out-of-band update, this time for Mac users only”