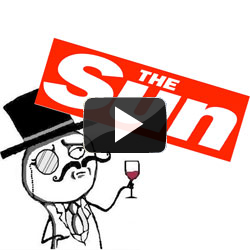 The Sun newspaper, the sister publication of the recently extinguished News of the World, has suffered a hacker attack.

In what is even more bad news for Rupert Murdoch’s stable of newspapers, already dogged by the phone hacking scandal, the LulzSec hacking gang appears to have breached security on the website of The Sun, Britain’s best-selling newspaper.

Visitors to The Sun’s home page are instead redirected to LulzSec’s Twitter feed where it is bragging about its accomplishments.

Here’s a YouTube video by my colleague Paul Ducklin, down in Australia, who woke up to this story – Paul took a moment out of his normal morning routine to take a cheeky look at the hack, and to offer advice to web site operators everywhere:

The LulzSec hacking gang also published a bogus news story claiming (in rather poorly constructed English) that Rupert Murdoch, the head of News Corporation which owns The News of the World and The Sun, had been found dead.

The false news story claims that 80-year-old Murdoch died after ingesting a “large quantity of palladium”, and stumbled into his “famous topiary garden”. “Topiary” is a name of a high profile member of the LulzSec hacking gang.

In addition, mobile numbers, email addresses and passwords apparently belonging to News International employees have been published on the internet.

The motivation for LulzSec’s hack against The Sun is unclear, but it is possible that the hacking gang is still angry about the newspaper’s coverage of the arrest of British teenager Ryan Cleary last month.

Cleary, who newspapers speculated was affiliated with the LulzSec hacking gang, was described by The Sun using words such as “geek”, “nerd” and “oddball” in their report of his arrest.

Of course, LulzSec could have done much more harm with their hack. They could have attempted to infect computers visiting The Sun’s website with malware, for instance. Nevertheless, their hack is against the law.

At the time of writing, The Sun’s website still appears to be suffering problems. Websites belonging to The Times, The Sunday Times, and News International also appear to be experiencing difficulties. It’s likely that News International’s own IT team have brought down the sites to prevent any further damage being done.

Of course, it’s less than a month since LulzSec announced it was calling an end to its hacking activities.

Clearly one has to wonder if LulzSec’s attack against Murdoch’s newspapers are a one-hit-wonder, or whether they’re back for good..

8 comments on “The Sun gets hacked by LulzSec – VIDEO”