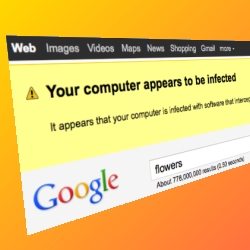 It’s only been a few weeks since the world’s web users woke up to discover a big black bar at the top of their Google search results (introduced when Google+ was launched).

Now, some users of Google search might start seeing something else close to the top of the world’s most famous home page.

Your computer appears to be infected.
It appears that your computer is infected with software that intercepts your connection to Google and other sites. Learn how to fix this.

At first glance, you might be worried when you see this message and think you could be on the receiving end of a fake anti-virus attack.

After all, haven’t you been warned hundreds of times in the past to trust the anti-virus software you installed on your computer, not unexpected messages that pop up on websites you visit?

All is explained in a Google blog post, however.

Damian Menscher, a security engineer at Google, describes how he identified that infected computers were sending search traffic through proxies to the search engine. The intention of the cybercriminals behind the scheme was to modify the search results served up by Google to point to money-making pay-per-click sites instead.

In all, Google estimates that a couple of million Windows PCs may be affected around the world by the strain of malware they are hoping to warn users about. The firm says that it’s already been able to successfully warn “hundreds of thousands of users”.

Fortunately, although Google does not scan your hard drive when you search for things via google.com, it can detect the unique traffic signature from visiting infected PCs and make a pretty informed guess about your computer’s health in regard to this malware strain. Google is hoping that the warning message will encourage users to update their anti-virus software, scan their computers and become more conscious of security issues.

I think what Google is doing should be applauded – anything which warns computer users about genuine malware threats has to be a good thing.

But, sadly and inevitably, there is the potential for cybercriminals to mimic the Google warning and direct users to dangerous downloads and scams. Of course, that isn’t a reason why Google shouldn’t warn their users, when it believes it has identified a security problem.

The danger is that many people may know what their own anti-virus software looks like when it displays a warning, but may be less familiar with how the Google warning presents itself, and where it links to.

Furthermore, Google points users to visit one of its webpages for further advice on how to fix the problem.

That page, however, includes the advice to search Google for anti-virus software suggestions. Hmm.. hasn’t that sometimes gone rather wrong for people as the following video demonstrates?

So, always be careful about what you search for, and the links you click on when trying to find anti-virus software.

No-one should be fooled into believing that Google’s initiative is any substitute for regular anti-virus software and sensible security practices. Google is attempting to alleviate a very specific malware issue that communicates with its infrastructure.

Google, you get my thumbs up for an imaginative idea that could help with a small part of the malware problem.

7 comments on “Google: ‘Your computer appears to be infected’”