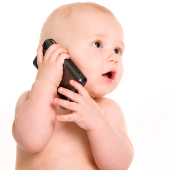 I am sure that any of you with young children can attest to the following: they just love playing with your smartphones or tablets.

In our house, our iPad is in constant demand by our just-about-to-turn-three year-old niece, nicknamed Doobs. She calls it The Board. She will literally plead for ‘The Boooooard’ as she drags you by the hand to locate the hiding place we stashed it in before her arrival.

What I find amazing is how quickly she learns the objective of a game and what sequence of buttons to press to restart a completed game.

Well, it turns out that a survey run by Legal & General backs this up, reporting that babies as young as six months are playing with their parents’ electronic gadgets. A surprising 19% of parents said their “children had sent a text message or made calls from their mobile phone without them knowing at the time”.

60% of little people aged six months to two years (as well as 1 in 10 babies under 6 months) were found to play with devices around the home like laptops, computers, phones and tablets.

And maybe this is not surprising. After all, youngsters learn much of their behaviour from the adults around them. If parents, nursery staff and babysitters spend a lot of time chatting, playing and working on these devices, they will obviously become more attractive to youngsters.

Maybe that’s why a three-year-old boy was able to buy a £9,000 Barbie pink Nissan Figaro on an internet auction site from his mum’s computer. And of course there is a security angle to this. If an adult gives a device to a kid to play on unsupervised, they cannot be sure what’s been sent, what settings have been inadvertently changed, or what gets installed

A friend of mine was just telling me about his 6-year-old nephew who nabbed his phone and installed a joke app to make the phone screen appear to have a cracked screen….hillllllarious!

We know that there is an increasing number of scams and malicious applications on popular sites, and we cannot expect this youngsters to understand how damaging an infection or scam can be.

The best advice is to ensure your devices are locked with a password. This will help stop your devices being used without your knowledge. For those of you that have given permission for a youngster to use your device, you should look into whether you can authorise a secondary password for any setting or applications changes.

And alas, none of these tips will stop your device becoming clogged with munge from sticky fingers or falling gracelessly down the stairs to an early grave. They only way to have that is to keep under lock and key. And that is really not much fun for anyone, is it?

6 comments on “Toddlers and technology: a bad mix?”