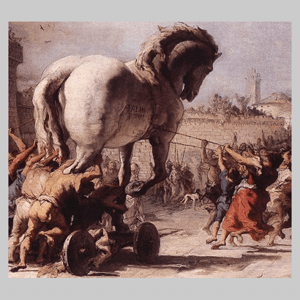 The word Trojan has many meanings, and when it is used without qualification in headlines, it’s hard to know which one is meant. An olden-day Trojan was an inhabitant of the ancient city of Troy, near modern Çanakkale in Turkey, on the Anatolian side of the Dardanelles.

The word is also short for Trojan horse. Once, this meant the dissembling wooden gift which tricked those same Trojans into defeat in Virgil’s epic Latin poem The Aeneid; today, it refers to the sort of dodgy software which tricks you into giving up control of your PC.

In Australia, if you want to renovate your house, you’ll need power tools, and they might be Trojans; in the USA, if you get lucky, you’ll need a condom, and you might roll out a different sort of Trojan.

(Since the ancient Trojans are best remembered for puncturing a hole in their own defences – to admit the aforementioned wooden horse – thus allowing the enemy to spill into their city and destroy it, I’ve never quite understood the metaphor in branding condoms as ‘Trojans’. Perhaps that’s why I’m not in marketing.)

But there’s another sort of Trojan, namely an asteroid or small satellite which shares its orbit with a planet or larger satellite.

This sort of Trojan makes fascinating study, because it involves dealing with the interaction of three celestial objects. The so-called three-body problem is a special case of the n-body problem, first expounded by Sir Isaac Newton in his 1687 book known as Principia, in which he also introduced the Law of Universal Gravitation.

Obviously, the zero-body and one-body problems are trivial and uninteresting. And it turns out that the mathematics for the two-body problem – for example, working with the sun and the earth, or the earth and the moon – is fairly straightforward. Sir Isaac sorted things out for n=2 back in the 17th century.

It seems obvious that the mathematics ought quickly to get hairy as n increases. When n=20, for example, you’d expect a jolly spicy set of equations. But it might be a surprise to learn that things get almost insurpassably tough right at once. As Wikipedia rather drily remarks, “for n ≥ 3 very little is known about the n-body problem.” What we do know, thanks to the brilliant 18th century mathematician Joseph-Louis Lagrange, is that there are “five positions in an orbital configuration where a small object affected only by gravity can theoretically be stationary relative to two larger objects”.

To this day, they are called Lagrange points, denoted by L1 to L5.

And that’s where our brand-new Trojan comes in.

Discovered in October 2010, this celestial body has now been confirmed as the very first astronomical Trojan known to orbit along with Earth. The Trojan loops, well, quite loopily, around L4, which itself loops around the sun, 60 degrees ahead of our Earth-bound trajectory.

The Trojan, which is estimated to be about 300m across, therefore precedes us round the sun. Fortunately, it maintains a reliable, healthy and, most importantly, consistent distance from our planet.

That’s what makes it harmless: it’s locked into orbit with us, rather than on any sort of collision course. At least for now.

And it’s important because Earth Trojans – of which there may be many – are hard to find. Trojans of Mars, Jupiter and Neptune are known; so are Trojans of Saturn’s moons. But Earth Trojans circle mostly in our daylight sky, making them really tricky to spot.

But where, I’m sure you are now dying to ask, is the link to computer security, and to computer Trojans?

Astronomers, like malware researchers, deal with huge numbers of new discoveries. Naming something if it’s one of the very first examples of its type is one thing. Reliably naming objects by the million is quite another. For this reason, malware researchers have shifted from catchy names like Jerusalem, Tremor and Grand Old Duke of York (don’t ask – that one’s a story in its own right) to taxonomic dullnesses such as Troj/FakeAV-DB and Mal/ObfJS-E.

Catchy names now appear only occasionally for really well-known viruses, such as Conficker and Stuxnet.

Astronomers, unsurprisingly, have a similar approach, so I’m sorry to have to tell you that this super-cool, first-of-its-kind, Earth Trojan is unmajestically known simply as 2010 TK7.

If you’ve got a cooler name, please leave a comment and let us know. We’ll pass your suggestions on to the astronomical powers-that-be.

And be sure to check out the animations which yielded the above 2010 TK7 diagram.