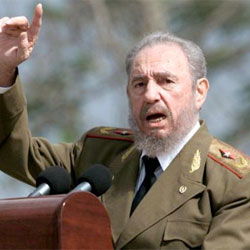 Be on your guard if you receive an email seemingly from Chile’s “24 Horas” news website announcing the death of Fidel Castro, the former dictator of Cuba.

The spammed out messages, which are written in Spanish, look like the following: The messages have a subject line of

and the text inside the emails claims that the longtime Cuban dictator died in the afternoon at his home, and that officials claim that he was taken ill a few days ago after suffering a sudden heart attack.

Recipients are urged to click on the image to see a breaking news video report about Fidel Castro’s death.

Of course, if Castro was really dead (it’s believed that he has been in very poor health for some years) then it would be headline news on the likes of the BBC and CNN. But I haven’t seen any reports from those news outlets.

So don’t be fooled into clicking on the links in this email, as they will take your computer to a Trojan horse (which Sophos detects as Troj/DwnLdr-JGW) that in turns downloads further malicious code (Troj/Agent-SYF) onto your Windows PC.

As a sidenote, this isn’t the first time that the Castro name has been associated with cybercrime. Two years ago, it was revealed that Antonio Castro Soto del Valle, Fidel Castro’s son, found himself tricked into revealing personal information to a virtual woman in an online love sting.