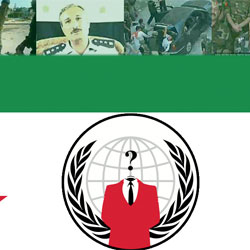 Once again, hacking has turned political – with the website of the Ministry of Defense in Syria defaced by the Anonymous hacktivist collective.

Amid news reports of thousands of deaths in Syria after the authorities cracked down with deadly force using tanks and armoured vehicles against anti-government protests, visitors to the Syrian military department’s website have been greeted with the Anonymous logo and images and links to videos of dead protesters. A messsage included on the page in English and Arabic reads:

"To the Syrian people: The world stands with you against the brutal regime of Bashar Al-Assad. Know that time and history are on your side – tyrants use violence because they have nothing else, and the more violent they are, the more fragile they become. We salute your determination to be non-violent in the face of the regime’s brutality, and admire your willingness to pursue justice, not mere revenge. All tyrants will fall, and thanks to your bravery Bashar Al-Assad is next."

"To the Syrian military: You are responsible for protecting the Syrian people, and anyone who orders you to kill women, children, and the elderly deserves to be tried for treason. No outside enemy could do as much damage to Syria as Bashar Al-Assad has done. Defend your country – rise up against the regime! – Anonymous"

Attacks like this are effectively equivalent to graffiti on the wall of a building, albeit a building that you would normally expect to be better protected against such defacement.

Presumably the hackers exploited a vulnerability on the site to be able to post up their own content – which means that someone with a financial rather than political intent could have planted malware on their site to infect visiting computers.

Hat tip: Thanks to Naked Security reader @geenweer for alerting us about this hack.