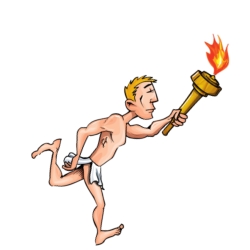 Facebook users are once again warning their online friends about a threat – the only problem this time is that it doesn’t really exist.

Messages are being sent across Facebook by well-intentioned Facebook users advising their friends to beware a virus that could “burn the whole hard disc.. C of your computer” while displaying an Olympic Torch.

A virus that actually physically burns your whole hard disk? Wow.. that sounds nasty. Especially if you’re resting a notebook on your lap at the time.

Could it even be possible? After all, you might have vaguely heard about how hackers might be able to set fire to your MacBook’s battery recently.

The truth is that the warning being spread on Facebook is nonsense, and although users are sounding the alarm to their online friends, they are actually doing nothing more than perpetuating a virus myth.

PLEASE CIRCULATE THIS NOTICE TO YOUR CONTACTS!
In the coming days, you should be aware! Do not open any message with an attachment called: Invitation FACEBOOK, regardless of who sent it.
It is a virus that opens an Olympic torch that burns the whole hard ...disc C of your computer.
This virus will be received from someone you had in your address book .. If you receive a mail called: Invitation FACEBOOK, though sent by a friend,
DO NOT OPEN IT and DELETE IT IMEDIATELY

Sound familiar? It did to me.

After all, there has been an “Olympic Torch” hoax (albeit one that doesn’t mention Facebook) doing the rounds for over five years already.

So what seems to have happened here is that a hoax has made the jump from traditional email to social networking site, and gained a Facebook-related element at the same time.