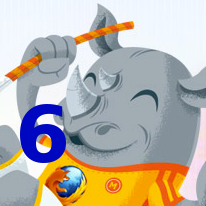 Firefox 6 is out. This is the second release under Firefox’s new ‘single-line railway track with regular stations’ development and release regimen.

Like last time, when Version 5 came out on the mid-year solstice, the official release appeared spot on target: 17 August on the Eastern side of the world, and 16 August in Mozilla’s timezone.

Code-wise, a fair bit seems to have changed – on OS X, for example, Firefox’s own self-orchestrated update is 9.8MByte, compared to a 28MBbyte download for the complete installer. Nevertheless, according to the What’s New section in the release notes, there don’t seem to be any major new features.

There is one change I really like, even though it’s minor and you might not notice it until it’s pointed out. (On second thoughts, perhaps I meant precisely because, rather than even though. Subtle changes are often the best and most useful.)

The domain name of the current URI is highlighted in the address bar (or, more accurately, the non-domain-name part of the URI is slightly dimmed) so that it stands out.

In some TLD jurisdictions, especially for little-known country codes, scammers have registered 2LD-like domain names to give them an aura of respectability.

The best-known example is probably co.cc, which is a true domain name under Australia’s ill-regulated Cocos (Keeling) Islands country code [*], unlike the well-regulated .com.au 2LD system used in mainland Australia. (Why the Australian federal regulators are so strict on .com.au yet so soft on .cc is an issue for another time.)

So this new Firefox featurette will help to remind you of domain name and hostname trickery. In particular, it will remind you that example.co.cc is not a domain name, but just a sub-domain of co.cc, and that visa.com.dodgy.example does not belong to visa.com.

As usual, there are several security-related bug fixes which are reason enough on their own to upgrade to Firefox 6.

Note that Mozilla has made a colour-coding mistake on its Known Vulnerabilities page, tagging this update with link text set against a white background, implying it is a low-impact update.

Click through to Mozilla Foundation Security Advisory 2011-29, however, and you will quickly see that it lists seven security issues, of which five are of critical impact (red text background), and two high (orange).

One of the critical issues itself relates to a whole raft of memory corruption bugs about which Mozilla says, “We presume that with enough effort at least some of these could be exploited to run arbitrary code.”

15 comments on “Firefox 6 is out – several critical security fixes and one cool new featurette!”