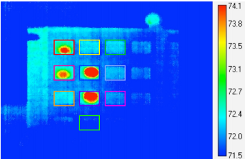 At the USENIX Security Symposium last week, researchers Keaton Mowery, Sarah Meiklejohn and Stefan Savage from the University of California at San Diego presented their paper “Heat of the Moment: Characterizing the Efﬁcacy of Thermal Camera-Based Attacks.”

Inspired by previous research on safecracking by Michał Zalewski, they thought it would be easier for a criminal to snoop on ATM PINs using a thermal (infrared) camera to detect residual heat from keypresses rather than current techniques using traditional video cameras. Thermal imaging provides several advantages. Unlike with traditional cameras, visually masking the PIN pad does not defeat the attack, and the ability to automate PIN harvesting using computer software further simplifies the task.

The researchers gathered 21 volunteers and had them test 27 randomly selected PIN numbers using both a plastic PIN pad and a brushed metal PIN pad.

The strength of the participants’ button presses and their body temperature were shown to affect the results to some degree. The researchers discovered that the metal pad made the attack nearly impossible to implement, but with the plastic PIN pad, it was even possible to determine from the heat signatures not only the numbers pressed but also the number order.

The researchers also compared human analysis of the video footage to their automation software. It turns out that not only does the software work, but often performs more accurately than the humans looking at the video.

While thermal cameras are a bit expensive, this research suggests that thieves could adopt this technique in the future. It’s easier to place and hide the camera, allows automated analysis and could return enough useful results to be profitable.

As far as we know, this attack hasn’t been used in the wild, but the cautious among us could opt to use ATMs with metal PIN pads to reduce the risk of becoming a victim.