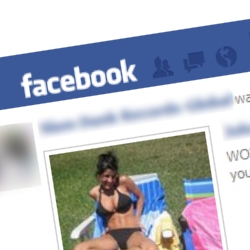 If you’re a Facebook user, please repeat after me:

Facebook doesn't let you track who is viewing your profile.

Third-party Facebook apps aren't allowed to do it either, and if they claim to offer the ability they are banned from Facebook.

Don’t believe me? Here is the official word on the issue from Facebook itself:

And yet, we continue to see scams spread far and wide across Facebook claiming to offer the functionality.

See this example, for instance, which tags a photograph of a woman sunbathing in her bikini with the names of Facebook users.

Because the photograph has been tagged with the names of Facebook users, they will see it appear in their newsfeed and will – no doubt – be curious to find out more. A comment on the photograph claims to point to a way for Facebook users to see who has been viewing their profile. The girl in the bikini was being used as tempting bait, just to bring traffic towards that link.

(You’re probably thinking by now – wouldn’t it be nice if Facebook gave its users the ability to opt-out of all photo tagging? Of choosing to never want to be tagged in a photo without their permission? And yes, it would be a very good idea – but Facebook seems less than keen to implement it).

If you’re foolhardy enough to click on the link, you are taken through the process of adding a third party application – handing it the keys, effectively, to your profile and authorising it to post messages, photos and notes to your Facebook wall. Of course, if you give it such permission it will simply perpetuate the scam – spreading it onto your friends using your and their names.

The purpose of all this subterfuge? To trick you into taking an online survey – which earns commission for the scammers. Remember – you should always think twice (and maybe three times!) before allowing an application to access your Facebook profile, as there are many rogue apps designed purely to make money for the scammers and spread their viral schemes to as many users as possible.

Photo tagging pictures of women wearing bikinis isn’t the only way that the scammers bring traffic to their campaigns, of course. They still find old faithfuls, such as viral status messages, an effective means to spread enticing news of a way to view who has been viewing your profile.

Here’s just such a scam spreading on Facebook as I write:

WOW l cant believe that u can see who ls viewing your profile! l just checked my TOP profile visitors and l am SHOCKED at who ls still checking my profile! You can also see WHO VIEWED YOUR PROFILE here: [LINK]

Make sure that you stay informed about the latest scams spreading fast across Facebook and other internet attacks. Join the Sophos Facebook page, where more than 100,000 people regularly share information on threats and discuss the latest security news.

Hat-tip: Thanks to Naked Security reader Heidi for first alerting us to the bikini photo-tagging scam by sending us a tip