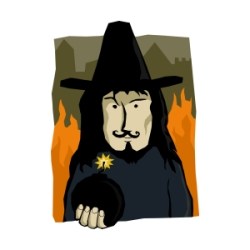 Anonymous hackers working under the flag of AntiSec have targeted a US defense contractor, stealing and publishing thousands of emails and documents.

Vanguard Defense Industries (VDI) works closely with government agencies such as the Department of Homeland Security and FBI, developing the unmanned remote-controlled ShadowHawk helicopter which can be used for aerial surveillance and fly at up to 70mph, shooting grenades and shotgun rounds in combat situations.

Of course, real life battlefield technology like that is no protection against cybercriminals, who appear to have published emails and documents containing VDI meeting notes, contracts, schematics and other confidential information as part of the hackers’ ongoing “F**k FBI Friday” campaign.

A statement from the hackers will remind readers of past hack attacks on Monsanto and Infragard, and makes clear that VDI’s senior vice president Richard T. Garcia was being singled out for particular attention:

The emails belong to Senior Vice President of VDI Richard T. Garcia, who has previously worked as Assistant Director to the Los Angeles FBI office as well as the Global Security Manager for Shell Oil Corporation. This leak contains internal meeting notes and contracts, schematics, non-disclosure agreements, personal information about other VDI employees, and several dozen "counter-terrorism" documents classified as "law enforcement sensitive" and "for official use only".

Richard T. Garcia is also an executive board member of InfraGard, a sinister alliance of law enforcement, military, and private security contractors dedicated to protecting the infrastructure of the very systems we aim to destroy. It is our pleasure to make a mockery of InfraGard for the third time, once again dumping their internal meeting notes, membership rosters, and other private business matters. The hackers seemed keen to underline that they weren’t planning to cease their activities anytime soon:

We are doing this not only to cause embarrassment and disruption to Vanguard Defense Industries, but to send a strong message to the hacker community. White hat sellouts, law enforcement collaborators, and military contractors beware: we're coming for your mail spools, bash history files, and confidential documents.

Operation AntiSec is the name that has been given to a series of hacking attacks, born out of the activities of Anonymous and the burning embers (or should that be watery grave?) of LulzSec.

Once again, a defense contractor is learning a lesson the hard way about the importance of strong computer security.