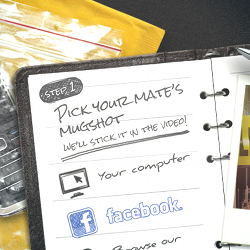 Australian voicemail company Messages On Hold is no stranger to guerilla marketing campaigns.

Company founder Kym Illman is publicly proud of his ability to get something for nothing, especially when this means deliberately shoving his company’s logo in front of someone else whilst they’re being interviewed on TV:

For years I've been a devotee of getting the Messages On Hold logo exposed throughout the media without paying for it. We've ambushed AFL games, Ashes Cricket test matches, Wimbledon, live news broadcasts, even the Olympics.

Illman doesn’t seem to spend much time caring about the rights and wrongs of his self-promotion, either:

Is it ethical? That's for you to decide. I can't make the media expose my business, but if the opportunity presents itself and I don't take advantage of it, more fool me.

But his company’s latest ‘leave the ethics to the community’ effort at viral marketing is surely one of the most irresponsible yet. You’re invited to ‘frame’ a friend for a crime.

You visit a website, put in a name, email address, age, gender and photograph, click a button, and Illman’s marketing backend does the rest. The victim almost immediately receives an email linking to a video – starring Illman himself. (He seems to like dressing up, and down, for company videos.)

Even if you expressly state that the victim is under 18 years old – my fake victim, Xxxx Yyyyy, was just 14 – Illman still has no qualms about sending an email like this:

In last night's nationally televised police press conference, authorities have appealed for Xxxx Yyyyy to report for questioning in relation to a string of hold ups.

If you or someone you know has further information on this individual's last known whereabouts your are advised to follow [these instructions].

If you click on the words [these instructions], you are taken to a video which claims to be from CNN: This video features Illman in front of a wall of fake Police logos, dressed as a senior police officer and identified as Commissioner Illman. His speech opens with a direct and explicit accusation:

We're seeking the public's assistance in locating a person of interest in relation to a series of major crimes over the past few days... We are extremely anxious to speak to one Xxxx Yyyyy, a male under 18 years of age.

The photo you’ve uploaded is prominently displayed. The video then interviews alleged victims of the offender, urges the criminal to stop his hold-ups, and then turns – admittedly rather obviously – into an advert for Messages On Hold. But the video has already run for several minutes by this time.

Once you’ve ‘framed’ your friend, you too receive an email containing the video link, which you are encouraged to spread to the victim’s friends and family:

Why is this marketing campaign a step too far?

Let me count the ways:

* It is offensive and demeaning to the recipient, who deserves better than to be accused on the internet of serious crimes.

* It is distracting and demeaning to the police, who rely on press conferences to liaise with the public about matters which are genuinely serious.

* It is distracting and demeaning to genuine online crime prevention websites such as Crimestoppers Australia.

* It is sailing close to the edge of the wind of the Spam Act by talking an intermediary into generating a commercial email to a friend.

* It is copying exactly the sort of behaviour used by scammers to scare you into opening a video link by claiming that you are featured inappropriately in it.

* It sets poor standards of respect for others online by encouraging you to hand over other people’s personal information such as age, photos and email address.

We have enough trouble with cybercrime and inappropriate behaviour online without Illman’s ill-thought out and buffoonish pretence of being a senior Australian police officer making bogus accusations against innocent people.

I therefore urge you not to participate in this viral marketing campaign. And if you agree with me that it is distracting and demeaning to genuine police efforts to engage with the public online, email the police service in your jurisdiction to say so.

Show some support for the cops who actually have to fight cybercrime on your behalf, rather than for those who try to milk the brand value of the police without paying for it.

I also call upon the police in all states and territories of Australia to comment publicly on this unimpressive behaviour.

Have your say here by voting in our poll: