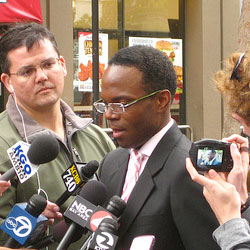 Partially nude photographs of a man said to be Linton Johnson, the chief spokesperson for the San Francisco’s BART, have been released onto the internet in what seems to be the latest outbreak of hostility between the transport network and the Anonymous hacktivist group.

Amid demands by Anonymous that Johnson be fired from his position representing the Bay Area Rapid Transport system, a series of photographs were released apparently showing the spokesman in a partying mood.

In some of the photos, the gentleman believed to be Mr Johnson is shown exposing his genitals.

The photos were accompanied with a message: (I’ve obscured the image above for what should be obvious reasons. But admire those words. Such wit! It’s as if the spirit of Oscar Wilde has crossed the veil of death and walks amongst us again..)

In addition, what is claimed to be Mr Johnson’s cell phone number and personal email address were also published.

Quite where the photos came from is unclear at this point, but Twitter is ablaze with users retweeting messages linking to the saucy images.

The natural suspicion has to be that Mr Johnson – or one of his acquaintances – has been careless with their computer security, and perhaps shared some revealing photographs a little too freely (perhaps on a social network?).

This may serve as a salutary reminder for all of us to remember that photographs taken in the heat of the moment can come back to bite us at a later date, and that true friends will only keep and publish pictures that you are comfortable with sharing.

Remember, once a photograph is posted anywhere on the internet it’s effectively no longer under your control. Someone else could copy it, or share it, meaning you can never be confident that it has been permanently wiped from the net.

For those who haven’t been following the ongoing kerfuffle between BART and the hacking community here is a recap: Earlier this month several BART stations in San Francisco controversially halted their cellphone service for a few hours. It was believed that people protesting about the fatal shooting of a homeless man by BART police, might be co-ordinating their protest via mobile phone.

Linton Johnson explained at the time that BART “didn’t try to shut down the protest. They simply turned off the cell service so it couldn’t become viral. It really is just a cost-benefit analysis of where your freedom of speech begins to threaten the public safety.”

BART’s decision didn’t go down well with many people, who felt it represented a heavy-handed attack on their freedom.

In response, hackers exposed the personal information of BART police officers and broke into the MyBART website to make public the private details of BART customers.

The fact that hackers have been prepared to put passengers and police officers’ at risk, and now have used a below-the-belt attack on BART’s spokesman, says to me that they’re not really interested in protecting individual freedoms. There may well be a case for BART to answer regarding the suspension of the cellphone network, but that doesn’t excuse hacking, putting the public and police at risk, and attempting to destroy a public official’s reputation.