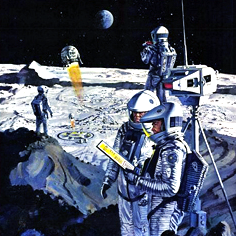 In the computer industry, truth is sometimes stranger than fiction.

(In computer security, truth is often stranger than fiction, as almost any random sample of spam will reveal – regular readers will surely remember the Are You Dead email which perplexed us back in April.)

Apple, as you probably haven’t been able to avoid knowing, is currently locked in legal battles with Samsung over the two companies’ tablet computing offerings.

And Apple’s Document 1 of Case5:11-cv-01846-LHK in the Northern California Distict Court doesn’t mince its words.

Apple accuses Samsung of a battery of wrongs, in the curious language which suffuses the US legal system, from patent infringement, through federal false designation of origin and unfair competition, to the heinous-sounding unjust enrichment.

Ergo, according to Apple, Samsung is not merely an imitator, but seems to have given up altogether on independent product development, choosing instead “to slavishy copy Apple’s innovative technology.”

(Now you know why not every democratic country thinks it best to have an adversarial legal system.

But plucky Samsung has done just that, as keen patent/mobile device commentator Florian Mueller points out with some amusement.

Samsung’s lawyers have presented documentation to the court in which they suggest that Apple’s 2007 “revolution” was no such thing. And they offer a freeze-frame from the 1968 movie classic 2001: A Space Odyssey as evidence: According to Mueller, Samsung’s court filing points out that the tablet computer in the movie has a lot in common with Apple’s modern offering: “an overall rectangular shape with a dominant display screen, narrow borders, a predominately flat front surface, a flat back surface (which is evident because the tablets are lying flat on the table’s surface), and a thin form factor.”

You have to admit: that’s not a bad argument. It’s certainly a very cool argument, and a surprisingly simple and straightforward one. So straightforward, in fact, that I suspect the lawyers will be delighted to argue over it for just as long as it takes.

Let’s just hope, if Apple really did borrow from 2001, that it borrowed only from the tablet devices shown above, and not from the spaceship’s central computer, HAL.

If you’ve seen the movie (what do I mean, “if” – of course you’ve seen it) you’ll probably remember they had some fairly serious computer security problems towards the end.

36 comments on “Apple got the iPad from WHERE?”