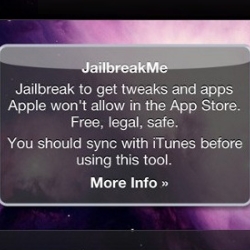 Nicholas Allegra, better known as ‘comex’, the creator of the JailBreakMe website which made it child’s play for iPhone owners to jailbreak their devices, has been given an internship at Apple.

The 19-year-old from Chappaqua, New York posted the news of his new position on Twitter:

Allegra has given Apple plenty of headaches in the last couple of years, finding security vulnerabilities in Apple’s iPhone that allowed anyone to convert their smartphone into a device capable of running unapproved applications.

Normally jailbreaking requires users to connect their device to a computer before they can start to tamper with the set-up of their iPhone or iPad – but JailBreakMe made it significantly easier.

Just visiting the website with Safari would trigger a security vulnerability, allowing code to run which would jailbreak the iPhone or iPad. Apple don’t like folks jailbreaking their iPhones, so it’s understandable that they would rather have the man behind the JailBreakMe website working for them rather than exposing their security weaknesses.

After all, whenever Allegra updated his JailBreakMe website to defeat Apple’s security he was given a potentially dangerous blueprint to more malicious hackers who may want to plant more dangerous code.

Each time Allegra has found a flaw in Apple’s software, the company has been forced to rush out a security patch.

So, what’s going to change now Apple has made jailbreaking expert Nicholas Allegra an intern?

Well, I would imagine that they’ll be strongly encouraging him to share with them any details of security flaws he finds with their software rather than updating his drive-by jailbreaking website. That way they’ll be able to work on patching any vulnerabilities he discovers before they are made public.

I’m sure they’ll be particularly keen to prevent Allegra from publishing details on how to jailbreak the next incarnation of iOS, version 5.0, or the much-mooted iPhone 5.