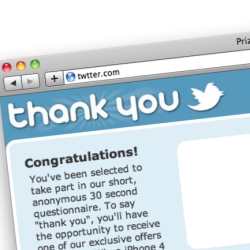 If you’ve got clumsy fingers like me, occasionally you probably type the wrong the wrong address for a website.

For instance, today I wanted to visit Twitter but I accidentally typed in Clearly this site has no qualms about using a Twitteresque colour scheme, or the familiar silhouette of the Twitter bird (who apparently is officially named “Larry”).

The webpage says that I have been especially selected to answer an anonymous questionnaire, and asks a couple of fairly harmless questions – are you male or female? how often do you tweet?

Of course, if you weren’t watching closely you might think that this is a genuine Twitter questionnaire, and if you really think you might be in the running for a free iPhone 4 or an exotic holiday you may be all too keen to participate. I decided that I’d like to try to win the Apple MacBook Pro and I was asked a question that probably even my Great Aunt Agatha could answer correctly – “can you watch videos on a MacBook Pro?” And here’s the whole point of the exercise. The people behind these webpages want your mobile phone number. If you scroll down and read the small print of the bottom of the page, all is revealed.

Once the service has your mobile phone number it will begin to SMS you multiple choice questions. It will cost you £1.50 to receive each question, and a further £1.50 to answer. If you answer the most questions correctly (up to a maximum of 50 – which will have cost you a rather hefty £150) then you’ll be invited to take a tie-breaker.

Only if you’re judged to have given the best answer to the tie-breaker (presumably) will you win your prize. Hmm.. not sounding so attractive now, is it?

And seeing as whoever is promoting this particular competition is raking in money by deliberately pretending to be Twitter by typosquatting their domain name, I personally would be less than keen to participate.

Whoever is behind this campaign is hoping that enough people will (like me) mistype Twitter’s URL and bring them lots of traffic.

Always remember to read the small print and have your wits about you when you’re offered something that seems too good to be true, and be careful who you give your mobile phone number to online.