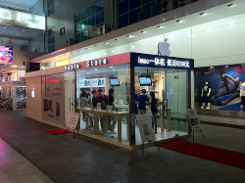 Apple has been in the news recently concerning the spate of entire fake Apple Stores (23 at last count) popping up in China.

Cult of Mac is reporting that Apple’s global security chief, John Theriault, has hired Don Shruhan, a former Pfizer colleague, to help track down and stop the production of counterfeit Apple products.

Theriault and Shruhan’s work at Pfizer had involved tracking down fake Viagra manufacturers.

The counterfeiting operations targeting Apple and their reaction came to light after diplomatic cables were released in the enormous dump of information from WikiLeaks.

One of the cables reads in part:

“As amazing as it seems, computer maker Apple Inc. had no global security team – including inside China – until March 2008…”

Fake computing products are often produced in the same factories that make the real deal. Corrupt managers will run the equipment in an unofficial “third shift,” typically with substandard components that are nearly indistinguishable from the real ones.

Apple has clearly picked an experienced team to help crack down on the problem, but as demand for iPhones and iPads increases, China’s counterfeit manufacturing industry is likely to continue to find ways of producing the knock-offs.

We have had frequent reports from people who have purchased cheap “third shift” products that are infected with malware directly from the factory.

On occasion even the real products, like digital picture frames and smartphones, are accidentally released with malicious code pre-installed, but it’s far less likely to happen and you’re far more likely to find out about it from the manufacturer and be provided with a remedy.

If you are an Apple user you can ensure you’re protected against these threats for free by downloading Sophos Anti-Virus for Mac Home Edition.