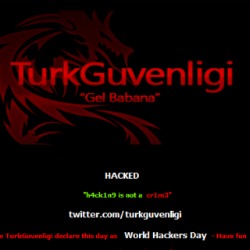 Popular websites including The Register, The Daily Telegraph, UPS, and others have fallen victim to a DNS hack that has resulted in visitors being redirected to third-party webpages.

Web security tester Paul Mutton managed to capture a screenshot of what visitors to The Register saw: Further websites which have been affected by the DNS hack include National Geographic, BetFair, Vodafone and Acer.

It’s important to note that the websites themselves have *not* been hacked, although to web visitors there is little difference in what they experience – a webpage under the control of hackers.

Instead of breaching the website itself, the hackers have managed to change the DNS records for the various sites affected. DNS records work like a telephone book, converting human-readable website names like nakedsecurity.sophos.com into a sequence of numbers understandable by the internet. What seems to have happened is that someone changed the lookup, so when you entered telegraph.co.uk or theregister.co.uk into your browser you were instead taken to a website that wasn’t under the control of those websites.

Because of the way that DNS works, it may take some time for corrected DNS entries for the affected websites to propagate worldwide – meaning there could be problems for some hours ahead. If you’re in the habit of visiting and logging into the affected sites, you might be wise to clear your cookies so the hackers aren’t able to steal any information from you.

In many ways we have to be grateful that the message displayed appears to be graffiti, rather than an attempt to phish information from users or install malware.

The question now is how did the hackers manage to change the DNS records for these sites?

Here’s a statement The Register published about the incident: Update: The Register has tweeted that its DNS records have been returned to normal.

As noted above, however, it may take some hours before the fix propagates around the net.