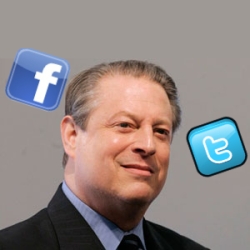 Is this spam or not? I’m finding it hard to decide.

But there’s certainly something about it which makes me feel uncomfortable with my security hat on.

Al Gore’s Climate Reality Project is encouraging social networking users to “donate” their online accounts for what they call “24 hours of Reality”.

During that time, the organisation will be able access your Twitter and Facebook account and post information about climate change and a global awareness event they are holding on September 14th with the aim of focusing attention on the “full truth, scope, scale and impact of the climate crisis about climate change”.

All the Climate Reality Project needs you to do is authorise its application so it can post Facebook status messages and Tweets in your name.

You’ll still be able to use the social networks as normal – it’s just that a few times an hour you will find messages from the Climate Reality Project issued using your name, interspersed amongst your regular online activity. Is it spam? I freely admit that I’m undecided.

I mean, there’s nothing to stop the Climate Reality Project’s supporters retweeting and sharing everything the campaign says anyway, and subjecting their Twitter followers and Facebook fans to all that messaging. Instead, what it sounds like is just another example of an organisation trying to muscle their way into social media success – ironically, the diametric opposite of what actually works. Something that might actually be considered rude in whatever the Web 2.0 version of netiquette is.

Perhaps the Climate Reality Project would do better to just be interesting. That way, people would reshare their content or build upon it in an authentic way which would most likely be more appreciated by the supporters’ online followers.

After all, isn’t an argument put more convincingly if people can see that some effort and passion has been put into forming the case, rather than someone lazing about on their sofa and getting an app to tweet it out for them?

But more than that. Isn’t this bad security practice? Should people be encouraged to hand control of their Facebook or Twitter account to a third party for a day?

Isn’t it a bit like lending somebody your credit card for 48 hours? Haven’t we seen enough abusive third-party apps on Facebook and Twitter without users being encouraged to install more?

Or.. in your opinion, does none of this matter? Is it okay for the normal rules of netiquette and account safety to be waived for 24 hours, because the cause of climate change awareness is so important?

I’m not sure what to make of it all. Why not tell us your opinion in the quick poll below and leave a comment.

50 comments on “Is Al Gore asking permission to spam from your social networking account?”