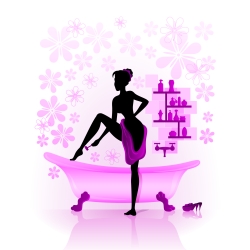 Here’s what it says:

NEW PRIVACY ISSUE WITH FACEBOOK. As of tomorrow, Facebook will creep into your bathroom when you're in the shower, smack your bottom, and then steal your clothes and towel. To change this option, go to Privacy Settings > Personal Settings > Bathroom Settings > Smacking and Stealing Settings, and uncheck the Shenanigans box. Facebook kept this one quiet. Copy and Paste on your status to alert the unaware.

It may not be rip-roaringly side-splittingly hilarious, but I guess it’s kind of amusing – and it mimics many of the genuine warnings that Facebook users have shared between themselves (and some hoaxes!) in the past.

But there’s a serious side to this chain letter.

Because ask yourself this – how was I able to get the above screenshot? None of my Facebook friends have posted the joke as a status message. I was able to visit a complete stranger’s wall to grab it.

And that’s because she had shared the post publicly.

See the small globe icon? That means you’re sharing the post with the world – not just with your Facebook friends.

Maybe it doesn’t matter that this woman has shared this particular post publicly, but a quick perusal discovers that her whole profile is pretty much wide open to the world.

For instance, I know that this woman strained herself at the swimming pool on Sunday, and had been depressed the day before, but she and her young son Josh enjoyed a recent trip to Legoland.

I’m also able to retrieve a list of all 185 of her Facebook friends, view hundreds of photographs, find out who she works for, where she went to university, and the full names of all four of her children.

So, yes, the joke is kind of amusing. But it turns out that the joke is actually not just on the poor woman I’ve singled out, but also a lot of the other people who spread the joke – as many of them do need to look again at their privacy settings and ensure that they are not sharing too much information with the entire internet.

Every time you post something on Facebook, you should check who you are actually sharing it with – and whether that’s appropriate.

Furthermore, you should have privacy settings configured appropriately for your personal information and your photo albums.

If you’re a Facebook user and want to keep up on the latest threats and security news I would recommend you join the Sophos Facebook page – where more than 100,000 people regularly discuss the latest issues.

Hat-tip: Thanks to Naked Security reader Mark for first letting us know about this chain letter.