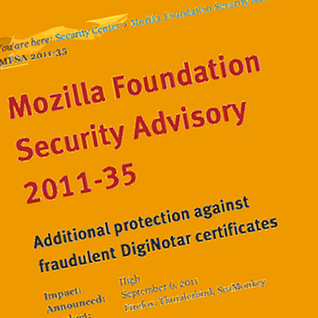 Firefox 6.0.2 has just come out, adding more protection to that provided by Firefox 6.0.1, which was necessitated by the mess caused by disgraced Dutch web security company DigiNotar.

(DigiNotar is the former Certificate Authority – or so-called “authority” – which managed to issue more than 500 bogus digital certificates in the name of major web properties such as Facebook, Twitter, Microsoft and Google; in the name of intelligence agencies such as the Mossad and the CIA; and even, it seems, in the name of other certifying authorities.)

Any website with a certificate bought through DigiNotar therefore become untrusted at once. As Mozilla quite bluntly explained in the 6.0.1 update, “sites using certificates issued by DigiNotar will need to seek another certificate vendor.” And that’s how it should be. A Certificate Authority isn’t supposed to make mistakes of this sort – not at all, let alone to this extent.

However, Firefox 6.0.1 exempted from its blockade any DigitNotar-tainted certificates signed at the root level by the Dutch government itself, using its STAAT DER NEDERLANDEN ROOT CA signing certificate. The Dutch public service was apparently convinced that none of the certificates for which it was the root signatory had been affected by signing irregularities at DigiNotar.

It turned out that the Dutch authorities had not one, but two, Certificate Authorities of its own, and its second root certificate – imaginatively named STAAT DER NEDELANDEN ROOT CA - G2 was not exempted in Firefox 6.0.1.

This was reported as a bug, and Mozilla set about adding an additional exemption for DigiNotar-tainted certificates signed by this CA. This would have reduced the impact of the Firefox certificate blockade on the web services provided by the Dutch authorities.

This sort of step – vigorously disowning everything tainted by DigiNotar – is aggressive but, in my opinion, necessary. Getting into a certification relationship with company X is like buying shares in company X. If the price goes down, all shareholders lose out simultaneously. If the company goes down, you go down with it.

Let’s see whether this fiasco causes the Dutch authorities to reconsider modern public service buzzwords such as “cloud” and “outsourcing”!

–
NB. This article was updated following an email from Naked Security reader Boris, who pointed out I hadn’t read the Mozilla bugfix thread all the way through! The 6.0.2 patch doesn’t back off slightly from its previous position of certificate blockage, as I said at first. It actually increases its extent, following the Dutch government’s decision to abandon any certificates with DigiNotar in the signing chain. (Thanks, Boris.) And Dutch reader Beamzer suggested rewording the article to make it clear that the Dutch government’s root certifcates themselves aren’t revoked, just that having the Dutch government as a root signatory no longer exempts your DigiNotar-tainted certificates from being blocked. (Thanks, Beamzer.)

One comment on “Firefox 6.0.2 fixes yet more DigiNotar certificate fallout”