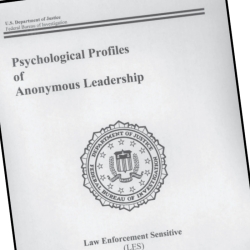 The faceless power of Anonymous rages on.

Like headless horsemen, they gallop across the internet, intent on causing massive headaches and embarrassment for some, while keeping their fans and the media informed via social media.

Sounds even too good for a Hollywood movie plot. You couldn’t make it up.

But it turns out that someone did make up the recently disclosed FBI document ‘Psychological Profile of the Anonymous Key Personalities’ [PDF].

And the story was covered by several reputable media outlets, though admittedly some voiced skepticism.

On September 8, Anonymous used Twitter and Tumblr to distribute the fake document. The question is why did anyone ever think it was real? So all this made us at Naked Security a bit suspicious at the time. So no surprise that this so-called FBI document turns out that it is a fake.

The thing is though, it does make for interesting lunchtime reading. I absolutely love some of the profiles in this faux document.

It defines “Kayla” as a violent, amoral bisexual with an inferiority complex, and “Topiary” as a youthful, obsessive idealist, possibly afflicted with Aspergers.

Forgive the quasi-psychology here – couldn’t a fake document, if indeed it is written by the Anonymous leaders, be used to help the FBI and other authorities better understand the collective? What seems like nonsense to its authors could accidentally reveal some interesting insights for those that analyse and pigeon-hole personalities.

That said, some of you might remember that great article by Malcolm Gladwell where he concludes that criminal profiling isn’t all that helpful to the capture of wanted criminals. So what is the upshot? Whoever is involved in writing this didn’t waste the FBI’s time with this forgery, because they must have been aware from the get-go that this did not originate from their internal team.

Those responsible for the document did however manage to get the internet, media and bloggers yacking about it. Yes, even me. Anonymous have notoriety because many people have written about it. And if Anonymous did indeed pull this together, they have just lied to their online followers. tsk tsk.

Please, can we all make sure we take this collective’s word with a grain of salt next time?

3 comments on “Fake FBI Anonymous psychological profile: a lesson to all internet users”