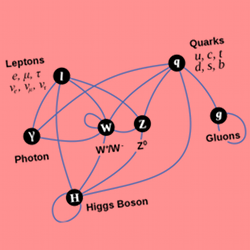 (Don’t worry. When we do, we take great care to find some sort of connection – however nebulous – to the cyberworld, just to keep you, our readers, onside, and to ensure that the URIs in your web logs look as relevant and as important as ever.)

But some news just cries out to be told, like this: that researchers at the European Organization for Nuclear Research, better known as CERN, claim to have exported subatomic particles from Switzerland to Italy at greater than the speed of light!

You read that correctly. Greater than the speed of light – something which even science fiction fans accept isn’t really supposed to happen.

Reports say that CERN boosted streams of neutrinos to a whopping 300,006 kilometres per second on their journey from Geneva, Switzerland, to a laboratory over 700km away in Gran Sasso, Italy.

But received wisdom – and the so-called Standard Model of physics – says that the neutrinos ought to have topped out at just 299792 kilometres per second, the speed of light. Suddenly, the laws of physics seem to have an exploitable vulnerability.

The results now need checking out, a project which researchers worldwide will doubtless be keen to take on.

Unless and until the findings are disproved, however, we can all hope that this means that the speed of light will no longer be the limiting factor in the speeds at which we can send data across the internet.

And then, who knows?

Perhaps we will be able to replace our fibre optic cables with neutrino-based transmission systems, and gain an unexpected 0.07% improvement in performance?

Just imagine how much more YouTube video we’d be able to pack into our busy lives!

16 comments on “Has CERN found an exploitable vulnerability in physics?”